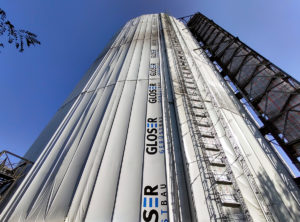 Cathedral of industrial culture, important location on the national and European route of industrial culture, Europe’s highest exhibition hall, symbol for the successful structural change in the Ruhr area – the Gasometer in Oberhausen is known far beyond the city limits, stands for the eventful history of the North Rhine-Westphalian region and thus plays an important role in tourism.

With its dimensions of 117.5 meters high, 67.6 meters in diameter and 210 meters in circumference, the gasometer, built in 1929, is the largest disk gas container in Europe. After its closure in 1988 and renovation in 1993/94, the building is now used as an exhibition hall of international standing. In order to be able to use the old gas storage facility for large exhibitions in the future, a comprehensive renovation is now required. The repair measures – through which the entire rust is to be removed, a new coating applied and the cracked foundation repaired – cost a total of around 14.5 million euros. The work in the areas of steel construction and corrosion protection is carried out by RODOPI Marine GmbH from Düsseldorf, which actually works on coatings for ships and offshore structures is specialized.

Originally, the disc gas tank had an important function in the network of the Oberhausen coal and steel industry. Initially, the gas storage facility with a capacity of 347,000 cubic meters was used as a store for furnace gas from the blast furnaces used in iron production. The gasometer later took on coke gas from the Osterfeld coking plant, which was used to supply the surrounding industrial plants. After the building was hit by bombs several times during World War II and caught fire during repair work after the war, it was rebuilt in 1949. However, due to the stagnating demand for coke and the resulting closure of the coking plant in Oberhausen, the Oberhausen Gasometer was shut down in 1988. At the suggestion of the International Building Exhibition (IBA) Emscherpark, it was converted into an exhibition hall in 1993/94 with funding from the State of North Rhine-Westphalia. The Cathedral of Industrial Culture has also been a listed building since 1996.

“Like no other building, the Gasometer combines the identity-creating past of the Ruhr area and the successful structural change in the region. The exhibitions, the unique spatial experience and the opportunity to take a look at the western Ruhr area from the roof of the Gasometer attract hundreds of thousands of visitors every year ”,

“However, wind and weather have left their mark – rust gnaws at the outer skin, cracks have appeared in the foundation over the years. The gasometer is therefore closed until spring 2021 due to urgently needed renovation work.”

Elaborate derusting of the inner ceiling by hand

The gasometer is based on a base plate and circumferential strip foundations, the roof is supported by a radial support structure made of trusses. The 24-cornered outer shell of the gasometer consists of riveted steel sheets and 24 steel supports, the support feet are clad with masonry on the outside. Penetrating moisture has damaged the masonry structure, and the outer shell has been badly affected by corrosion over time.

“In order to permanently restore the load-bearing capacity and the corrosion protection, the old coatings are first removed using the dry blasting method – but inside we carry out a complex process of derusting the inner ceiling by hand. The building envelope is then given five layers of coating as protection against wind and water. Up to 40 employees are involved in the project ”,

explains Burak Dogan, employee of RODOPI Marine GmbH and project manager for the renovation work on the Oberhausen monument.

In preparation for the corrosion protection work, the gasometer was scaffolded in February 2020, followed by the enclosure of the facade scaffolding with a light-colored tarpaulin in March. This ensures that paint and metal residues remain on the construction site when the outer shell is blasted. When working on the corrosion protection later, the tarpaulin also prevents the treated surfaces from being exposed to the elements. In addition, it enables constant conditions in terms of humidity and temperature during the drying of the paint layers. For this reason, the tarpaulin is airtight.

“We have also been working on the construction site since February 2020 to carry out preparatory measures for the steel construction and corrosion protection work. The gasometer is a very large object, so we needed longer hoses than usual for our work such as the dry blasting process and had to adapt our conventional equipment ”, 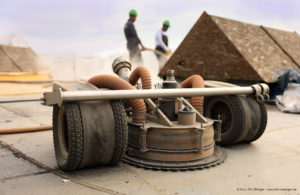 reports Dogan. Using the dry blasting process, the RODOPI employees then removed the original coating from the outer jacket surface, including the mill skin that was still present. Then the damaged and no longer load-bearing steel components were processed or replaced in order to restore the load-bearing capacity. This step was carried out in close coordination with the monument protection authority, which ultimately decided how much steel could be removed and replaced. However, the work on the roof required a different procedure from the specialists and presented them with new challenges.

“Initially, the idea was to also use the dry blasting method to strip the roof, but it no longer had its original load-bearing capacity. The roof could not have withstood the weight of the equipment and employees used plus the abrasive that sticks during the process,”

“That’s why we used a remote-controlled robot that we controlled with a joystick. This robot removed the old layers of paint using a water jet process.”

This is followed by the coating of all stripped, processed or replaced elements of the gasometer. In order to protect the cathedral of industrial culture from corrosion for the next few decades, the RODOPI specialists apply five coats of paint. First of all, the structure is given a primer made of zinc dust.

“Among other things, this substance is used to produce zinc dust paints, which act as a separating layer between steel and the corrosive environment and also have an electrochemical protective effect. As a rule, they are used in places that cannot be galvanized or are difficult to access for technical reasons, and protect steel from corrosion even under extreme stress”, 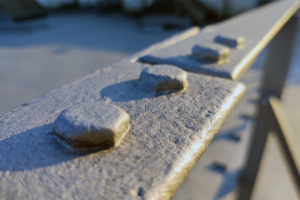 says Dogan. In addition, zinc phosphate coatings are applied in order to then apply the top coat. The new coat of paint on the gasometer consists of a gray base tone with an oxide-red tint. It is a further development of the color used in the reconstruction in 1949 – with a special feature: the new top color contains iron mica, which makes the gasometer shimmer and increases the protection against corrosion. In order to determine the original color of the gasometer and to match the new body color to the original shade as much as possible, real detective work was required.

Samples were taken over the entire area of the building and analyzed by the LVR Office for the Preservation of Monuments in the Rhineland. The investigations showed that the gasometer has received more than one coat of paint in its history. The office found a total of 14 layers of paint in the laboratory tests. For this purpose, three 30×60 centimeter sample sheets were flexed out from one of the blowers. Using these patterns, the many layers of paint could be exposed in detail under a microscope with a scalpel. Due to the applied coatings, the corrosion protection will probably last three decades. All component joints, connections and the foundation are also sealed with a suitable sealant against penetrating moisture.

Short profile
Since 2010, the RODOPI group of companies from Düsseldorf has been one of the leading companies when it comes to surface coatings for ships and structures as well as wind turbine service and component production. Rodopi Blades GmbH is active in the areas of rotor blade and component construction, Rodopi Wind Service GmbH & amp; Co. KG and Rodopi Wind Service Balkan d.o.o. take over service and installation work on existing wind turbines. The companies Rodopi Hanseatic GmbH and Rodopi Marine GmbH, on the other hand, offer individual solutions for corrosion protection and surface treatments. The RODOPI Group relies on experienced and specialized employees in all areas. Rodopi Personal GmbH, which belongs to the group, acts as a personnel service provider and provides clients with suitable workers for the areas of corrosion protection, GRP / CFRP processing and the finishing of surfaces on ships, yachts, wind turbines and steel structures. The focus is on occupational safety, fair pay and career opportunities for the company.