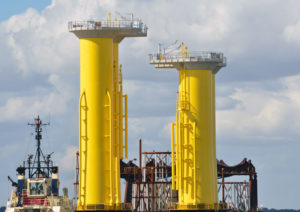 RODOPI has received an order for the coating of monopiles for one of the world’s largest offshore wind farms under construction.

All in all, RODOPI is coating all monopiles of the project for tough marine use on behalf of a renowned steel construction company specializing in offshore plants on the North Sea. The monopiles, treated to the highest standards, serve as a foundation structure for offshore wind turbines. The work includes comprehensive substrate pre-treatment, professional coating of the monopiles and the necessary extensive documentation.

It is expected that the wind farm to be installed will be connected to the grid at the end of 2021. After completion, the high-performance turbines of one of the world market leaders are expected to supply almost 1,000,000 households with electricity.

“We are proud to be an important foundation for the construction of one of the world’s largest offshore wind farms. RODOPI thus supports a sustainable form of energy generation and also secures numerous jobs as well as long-term relationships with its clients. Here all sides win equally”, Achmet Gkaroglou, Managing Director of RODOPI, is quoted as saying.

This website uses cookies to improve your experience while you navigate through the website. Out of these, the cookies that are categorized as necessary are stored on your browser as they are essential for the working of basic functionalities of the website. We also use third-party cookies that help us analyze and understand how you use this website. These cookies will be stored in your browser only with your consent. You also have the option to opt-out of these cookies. But opting out of some of these cookies may affect your browsing experience.
Necessary Always Enabled

Any cookies that may not be particularly necessary for the website to function and is used specifically to collect user personal data via analytics, ads, other embedded contents are termed as non-necessary cookies. It is mandatory to procure user consent prior to running these cookies on your website.