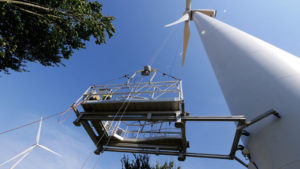 Düsseldorf in February 2020. In the fight against climate change, the conversion of the electricity supply is a particularly important factor. This requires investments of several billion euros – especially for the expansion of renewable energies and the extension and digitalization of the electricity grids. But the development of the energy turnaround, especially the expansion of wind energy, has recently come to a standstill. At the same time, the performance of wind power plants has increased enormously in recent decades.

„According to the German Wind Energy Association, onshore turbines, for example, produced an average of 1,115 kilowatts in 2000. In 2018, the average was already 3,233 kilowatts. The increase in output is also due to the increasing size of the wind turbines. While the average hub height in 2000 was 71 meters and the rotor diameter 58 meters, the key figures had risen to 89 and 73 meters five years later. The turbines installed in 2018 have an average hub height of 132 meters and a rotor diameter of 118 meters.“,

„With this increase in performance, the technical dimensions of wind turbines also grow, which in turn result in innovative access solutions for maintenance and repairs.“

Due to the increasing size of towers and rotor blades in wind turbines, conventional access concepts via scaffolding or crane are no longer sufficient for newer models. In order to carry out repairs or maintenance efficiently and quickly, even when assembled, modern access systems are often used in addition to the flexible rope access technology.

„These access systems mean an enormous gain in time and efficiency. Thanks to an experienced and international team of specialists we are, for example, able to quickly repair all the usual damage patterns on the most common blade types. Even with medium wind speeds, the robust access systems allow them to be used on the systems, reducing downtimes”, reports Osman.

Cracks, spalling or corrosion, which occur over time even with high-quality coatings due to the high loads during operation, can be quickly repaired if detected early.

Due to technological progress and economic competitiveness in many markets – as a result of its worldwide availability and relatively low costs – wind energy plays a central role in energy policy. As a result, wind turbines are constantly evolving and new, technologically innovative access solutions remain in focus. Further information is available at www.rodopi.de

Since 2010, the RODOPI-Group from Düsseldorf has been one of the leading companies when it comes to surface coatings for ships and structures as well as wind turbine service and component production. Rodopi Blades GmbH is active in the areas of rotor blade and component construction, while Robur Rodopi Service GmbH & Co. KG and Robur Rodopi Balkan d.o.o. carry out service and installation work on existing wind turbines. In contrast, the companies Rodopi Hanseatic GmbH and Rodopi Marine GmbH offer individual solutions for corrosion protection and surface treatments. In all areas the RODOPI Group relies on experienced and specialized employees. The Rodopi Personal GmbH, which belongs to the group, acts as a personnel service provider and provides clients with suitable employees for the areas of corrosion protection, GRP/CRP processing and surface finishing of ships, yachts, wind turbines and steel structures. The focus is on occupational safety, fair payment and promotion opportunities for the company.