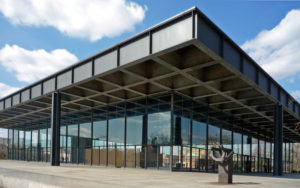 The RODOPI team was commissioned to recoat the filigree edgings and posts on the more than 1400 square metre glass facades of the listed building. All façade parts to be coated were meticulously prepared by hand and provided with fresh layers of lacquer in permanent coordination with the London-based David Chipperfield Architects and the State Office for Monuments. In order to make the structure of the original, matt paint visible again, the grey-black paint was applied by our team – as originally – using a brush.

“Working on an architectural icon is something special for everyone involved. The high standards of the restoration work in terms of preservation of historical monuments demanded a meticulous love of detail from us in order to completely preserve or restore the aesthetics of the building,” says Achim Schröder-Zweigardt, Managing Director of RODOPI Marine GmbH. And further: “The museum building was reorganized for the first time since the opening scarcely 50 years ago. Here, the preparation of the surfaces must be carried out with great sensitivity in order to protect the steel from wind and weather in the long term”.

With its self-supporting steel roof, the 2500 square metre building completed in 1968 by architect Ludwig Mies van der Rohe (1886-1969) is regarded as a landmark of classical modernism. The reopening of the renovated museum is scheduled for mid-2020.

This website uses cookies to improve your experience while you navigate through the website. Out of these, the cookies that are categorized as necessary are stored on your browser as they are essential for the working of basic functionalities of the website. We also use third-party cookies that help us analyze and understand how you use this website. These cookies will be stored in your browser only with your consent. You also have the option to opt-out of these cookies. But opting out of some of these cookies may affect your browsing experience.
Necessary Always Enabled

Any cookies that may not be particularly necessary for the website to function and is used specifically to collect user personal data via analytics, ads, other embedded contents are termed as non-necessary cookies. It is mandatory to procure user consent prior to running these cookies on your website.