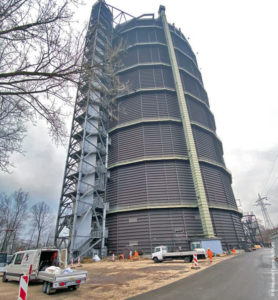 Order secured: RODOPI Marine GmbH will support the upcoming renovation work on the Gasometer Oberhausen, which is estimated at a total of 14 million euros, as a service partner. The RODOPI teams will be responsible for the areas of steel construction and corrosion protection as part of the complete refurbishment.

The outer shell, which is made up of riveted steel plates and supports, has been severely damaged by corrosion over time. Extensive preparatory work is necessary to permanently restore the load-bearing capacity and corrosion protection: For example, the industrial cathedral, built in 1929 and listed as a historical monument since 1996, will be closed for the work for almost a year and will initially be decoated using the dry blasting process. Inside, the preparation for the new coating of the entire roof area is carried out by means of complex rust removal by hand. After two primer coats, the building will then receive a top coat in order to be able to withstand wind and weather for many years and to serve as an important exhibition site again.

With its dimensions of 117.5 metres in height, 67.6 metres in diameter and 210 metres in circumference, the Gasometer was regarded as the largest disk gas container in Europe, which supplied the surrounding industrial plants with gas. After its closure in 1988 and its reconstruction in 1993/94, the building served as an exhibition hall. Since then, the Gasometer has hosted changing large exhibitions, which have already attracted more than 8 million visitors.

„Achim Schröder-Zweigardt, Managing Director of RODOPI Marine GmbH for securing orders: As an important location on the route of industrial culture, the gasometer is the symbol for the successful structural change in the Ruhr area. We are aware of this responsibility as a company and are pleased to be able to participate in the renovation of this industrial icon, which is visible beyond the borders of Oberhausen.“ And he continues: „Of course we will do everything we can to ensure that the high level of monument protection – as with the successfully completed work on the Neue Nationalgalerie Berlin – to do it justice again.“